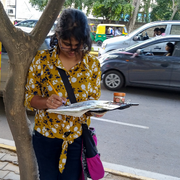 'Dala Kechidi' which is popular particularly in the Baripada area of Odisha, India. It is also served as the daily offering in the Shri Jahannath temple in Baripada. The Greek king Seleucus during his campaign in India (305-303 BC), mentioned that rice with pulses is very popular among people of the Indian subcontinent. The Moroccan traveller Ibn Battuta mentions kishri as a dish in India composed of rice and mung beans, during his stay around 1350.